Ecologists activists portraits from all around the world The ecologist movement “Extinction Rebellion” was created at the end of 2018 in Great Britain. Since then, it’s worldwilde.

To be heard, “XR” preaches the civil disobedience without violence to denounce the criminal inaction of governements towards the climate emergency. 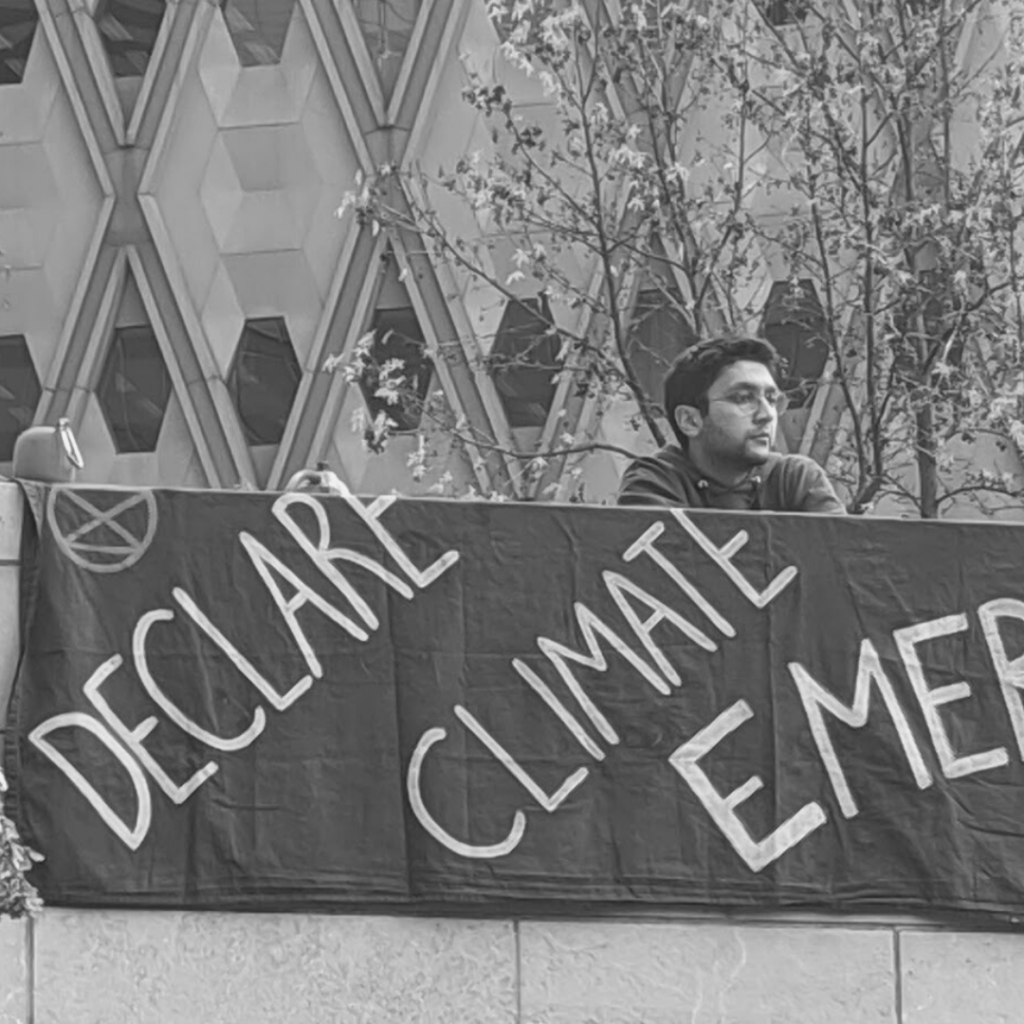 My name is Ameya Majmudar, from Seattle, USA.

The science is clear: humanity’s (capitalists’) material conceptions of development are currently incompatible with a planet on which we can and want to survive. Unfortunately, we are culturally and politically not educated enough to do something to change the story.

Most particularly in the US, the situation is complicated and the federal government is going the wrong way !

Decreasing regulations and harming the environment and people at the worst possible time. XR exists to create a mass movement that uses direct action to try to force governments, press corporations, to do what must institutionally be done.

We must set up deep changes, both on individual and cultural perspectives. People have to be educated.

To be clear, there are many ways to face the problem, and many things to solve it.
XR is apolitical but exists in the political area and tries to force institutions to do the right thing.

What actions have you already participated in ?

I have been into several marches and I have participated in some direct actions. In one of our most recent events, the  « Share Don’t Shop » event, people were encouraged to bring stuff that they don’t need but wich are still useful in general (unused paintbrushes for example), and maybe take a couple

things they know they will make good use of. It took the form of a informal market,with people dropping off and picking up stuff: no expectation of trade or money. It was held on Black Friday, the orgiastic day of consumerism in the US, and was posed as an alternative to that ugly time. We believe that a better world is possible and that rampant consumerism is clearly holding us back from that sustainable equitable goal. 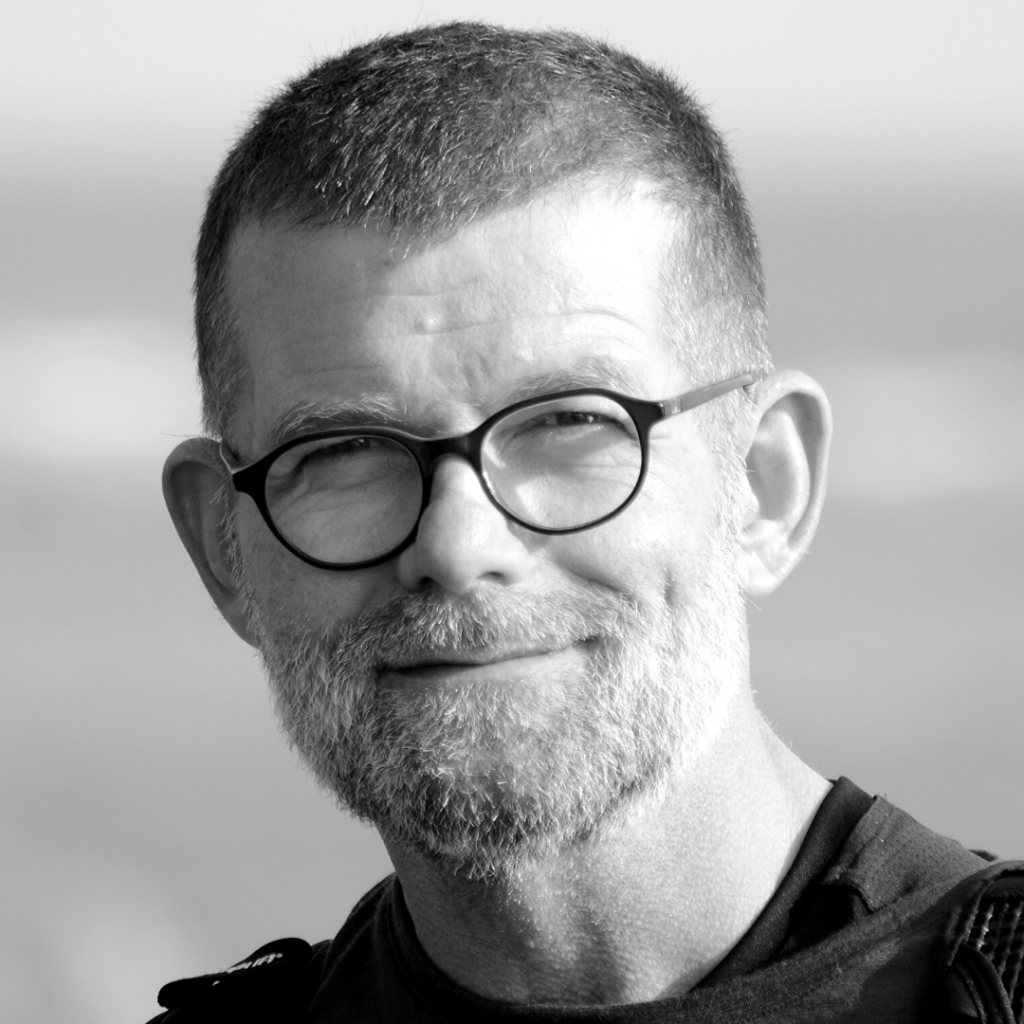 I was guided by frustration. I wanted to do something to provide the lack of action and of recognition by politicians and the society in general. Acknowledgement of non-violent civil disobedience as a justified mean. Public debate did not bring any change so this is natural for me to take action.

What are your main demands?

I want the establishment of citizen assemblies and the creation of an International Court of Climate. 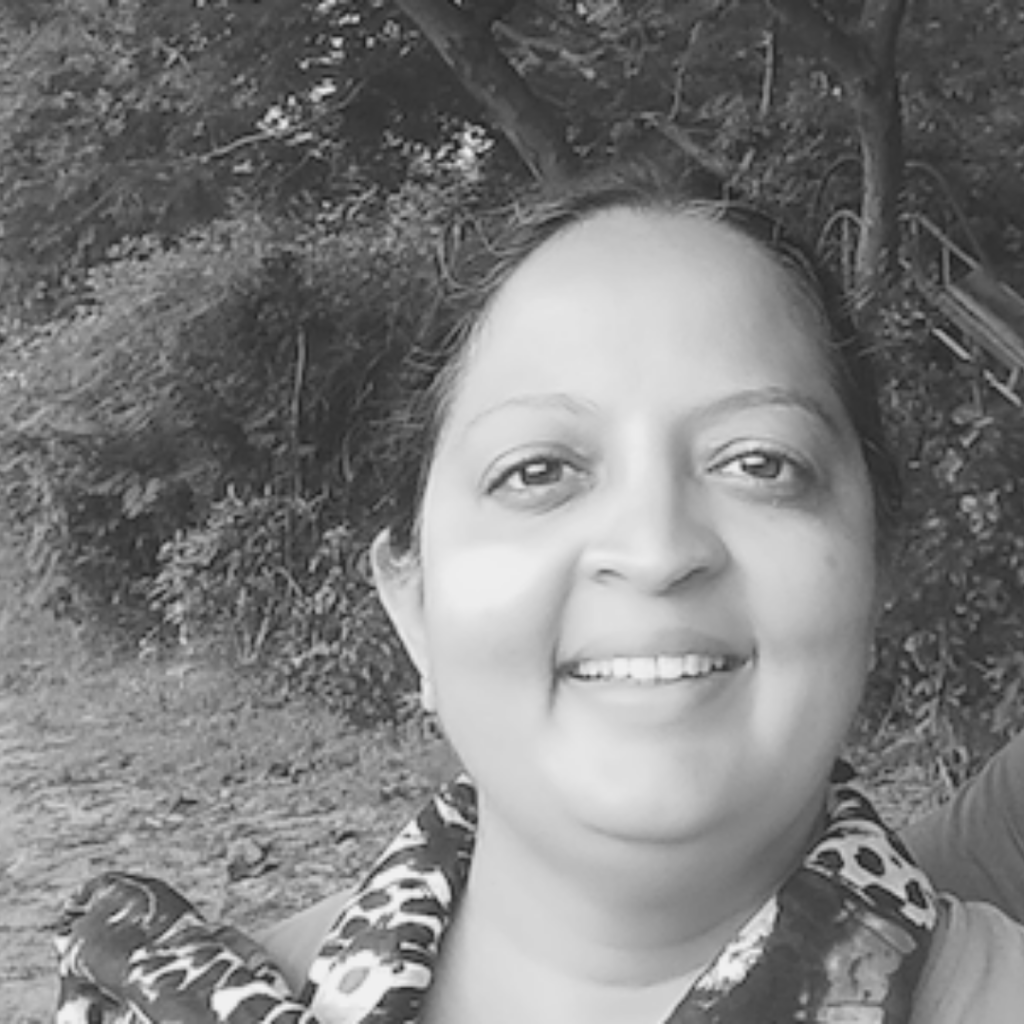 This movement caught my attention since people from XR were talking of Climate Justice which means fair treatment for anyone (any species) who is less privileged and not demanding only climate action. The XR approach –  radical but creative and Cheerful but peaceful direct actions based on the intersection of science and spirituality.

What are your missions in the local group ?

Build our local Bengaluru (BLR) XR chapter and plan strategic actions based on science and research in a local context. We are a very vast country and we will need a lot of support.

What actions have you already participated in?

XR BLR has joined all the student strikes from March 2019. Apart from this, XR BLR did a ceremonic Declaration Day die – in a public space called Cubbon Park on October 6th 2019 a day before the global rebellion in October began. At the moment, we are consolidating our teams and doing open meetings (Climate science talk), attending meetings with other groups who are questioning environment degradation and economies. 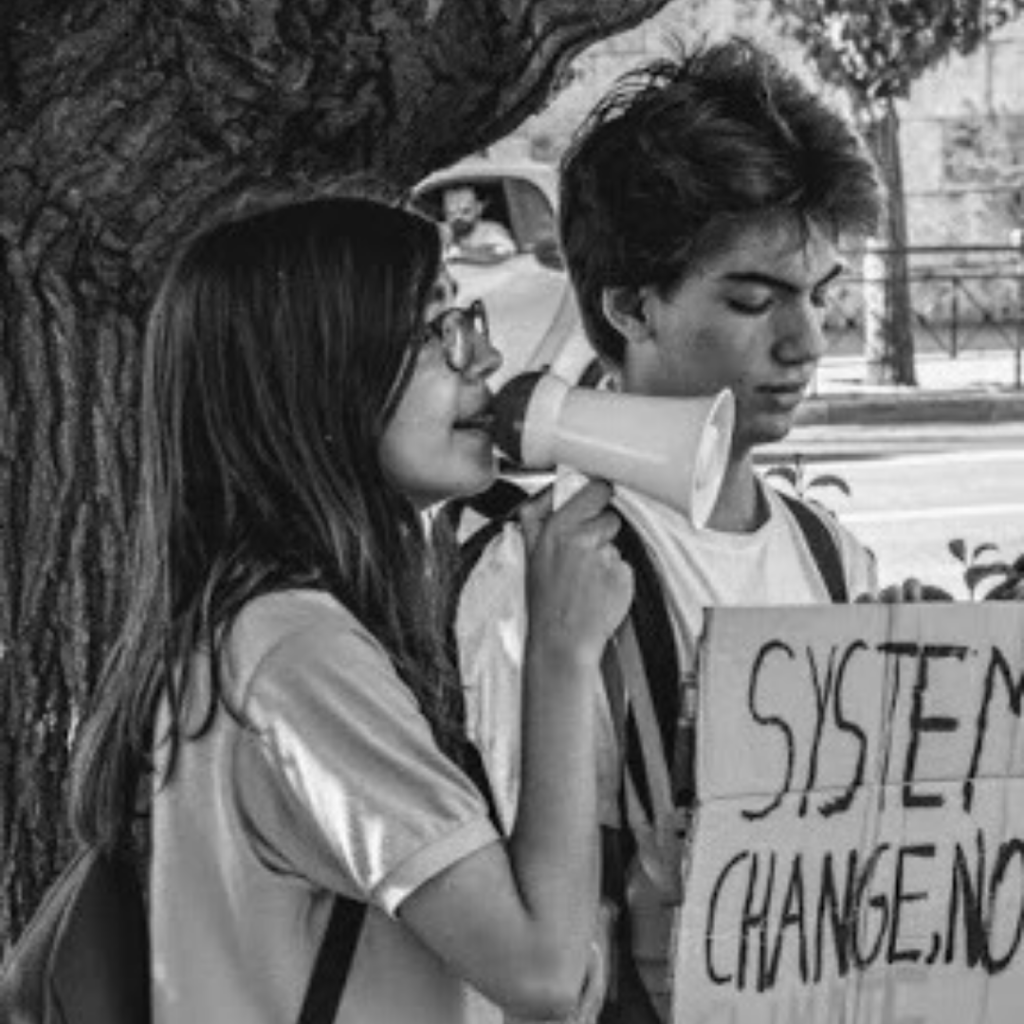 I joined Extinction Rebellion because I realised we, as young people, are the ones who can make the change. Being part of XR has given me so much hope !  There is so much passion and care shown in this project. We have a voice, and together we are louder.

What are your main demands?

First of all, following up with XR’s demands Governments must tell the truth by declaring a climate and ecological emergency in order to halt biodiversity loss and reduce greenhouse gas emissions to net zero by 2025.

My mission here in Athens is to help my generation start listen to each other by planning more meetings and actions! Climate crisis affects all of us and that’s why I want to make sure I am devoted and I contribute as many things as I can in XR Hellas. 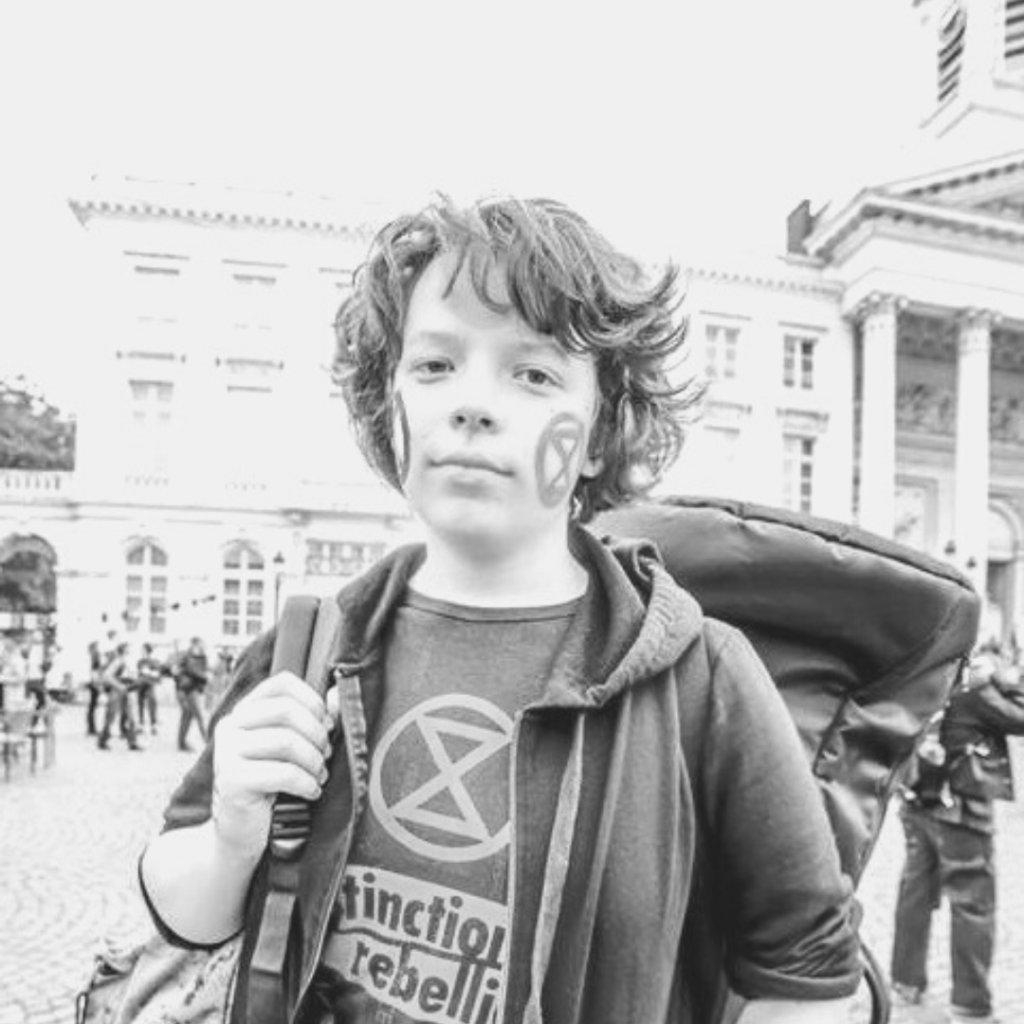 I am 14, I live in Liege. I started marching for immigration and climate justice by following my parent’s steps. Then, I took a more active role in events such as Youth for Climate, Students for Climate, Vote For My Future, etc… Between all that, I integrated another school that was more flexible regarding absences due to strikes. Indeed, my previous school was punishing me for missing school days related to participation to strikes.

Why did you join XR?

This was by researching XR values, chatting with my friends, but also hearing the XR’s opponent’s opinion that I figured out XR was a place for me.

I realized this was how I wanted to fight. Indeed, I felt the need to do more than just walking alongside. I wanted to get more involved in my own rebellion.

Within XR Liege, I am in charge of the artistic tasks: I design banners, flags, t-shirts, etc… I also handle external communication with other groups. 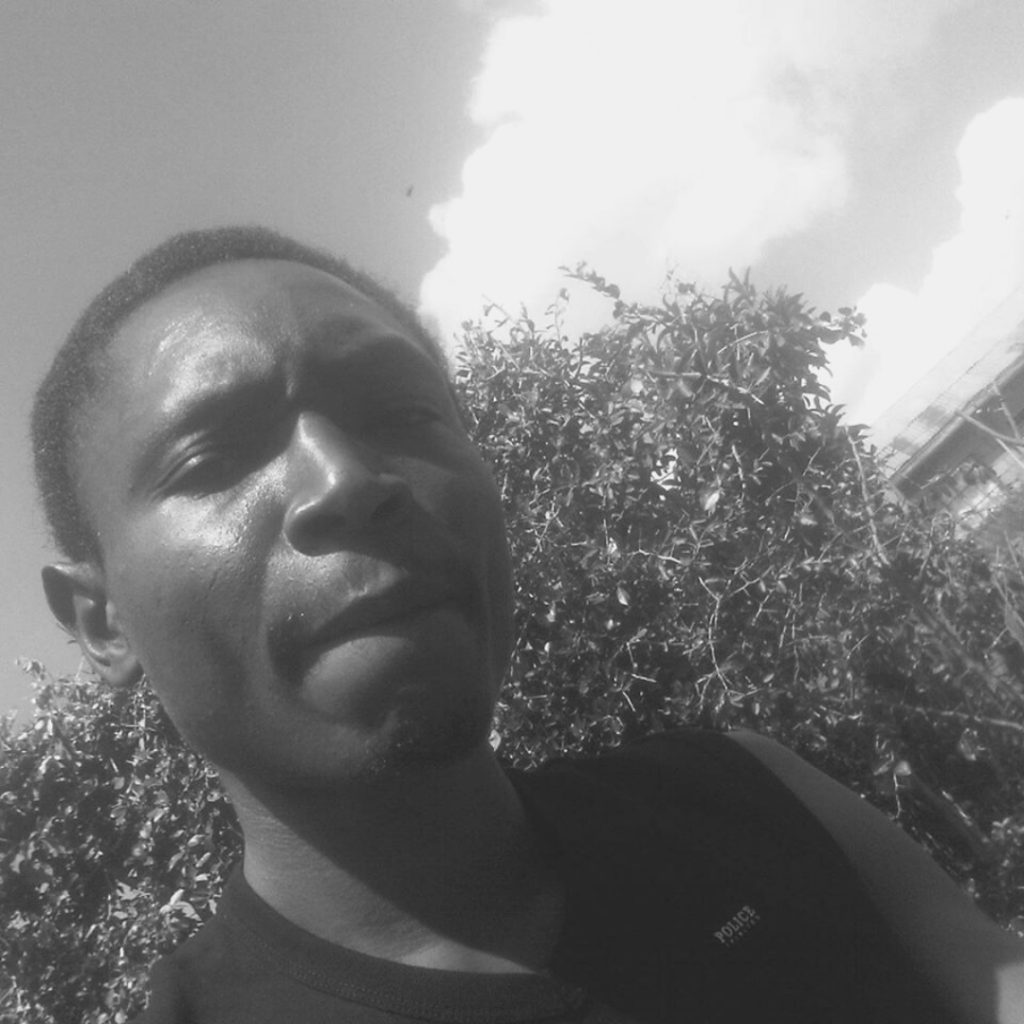 I had to joined XR movement because I am an environmentalist and I also wanted to let world know about climate crisis far and wide.

My main concern is to call on the world leaders and governments to cut carbon pollution to zero percent and substitute it by clean energy.

Since most world leaders are reluctant in ending carbon pollution for their selfish reasons, XR Nairobi, with all our dedicated members, has embarked on a mission to plant as many trees as possible, since it will help in taking in the carbon and in return give clean oxygen. We are a young group of about 90 members but we are growing day by day. Our future plans is to convince more students in Universities to join us. 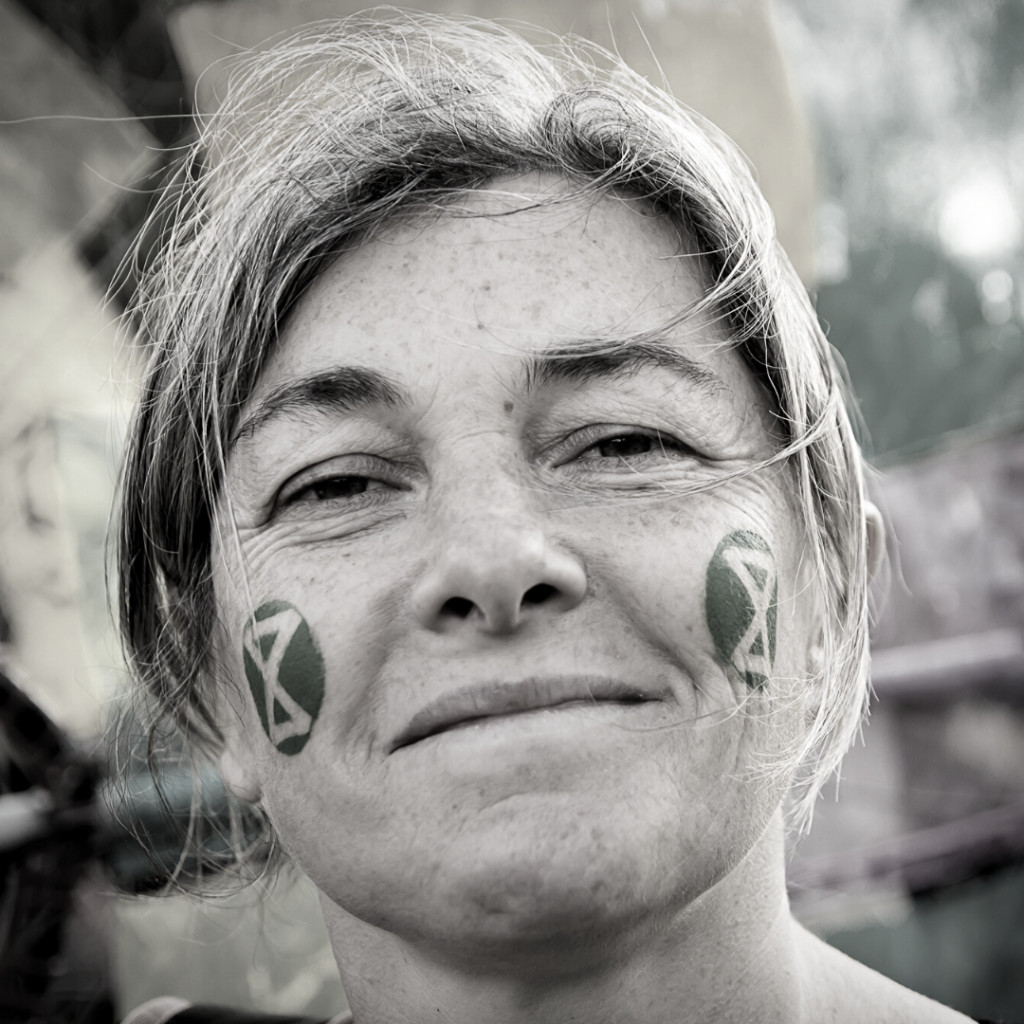 I am Sophie, 47 years, mom of 3 rebellious girls. I am working as an engineer in a company headquartered in Paris’ Financial District.

I lived in Germany for ten years, that is when I joined the Grunen. Ecological habits are a part of my daily life, waste management, minimalism consumption, I don’t own a car, no washing machine, no refrigerator, no dishwasher… Two years ago, I took part of EELV, as head of my local county’s list for the 2020 elections. Everything shifted during summer 2019.

That is when I realized the deception of all political parties. I started to chat with Swiss and German XR members and since August, I have been an activist at XR Ile de France.

There is a room for everybody in this group. A place with no hierarchy where the nonviolence policy makes me feel a part of a family. 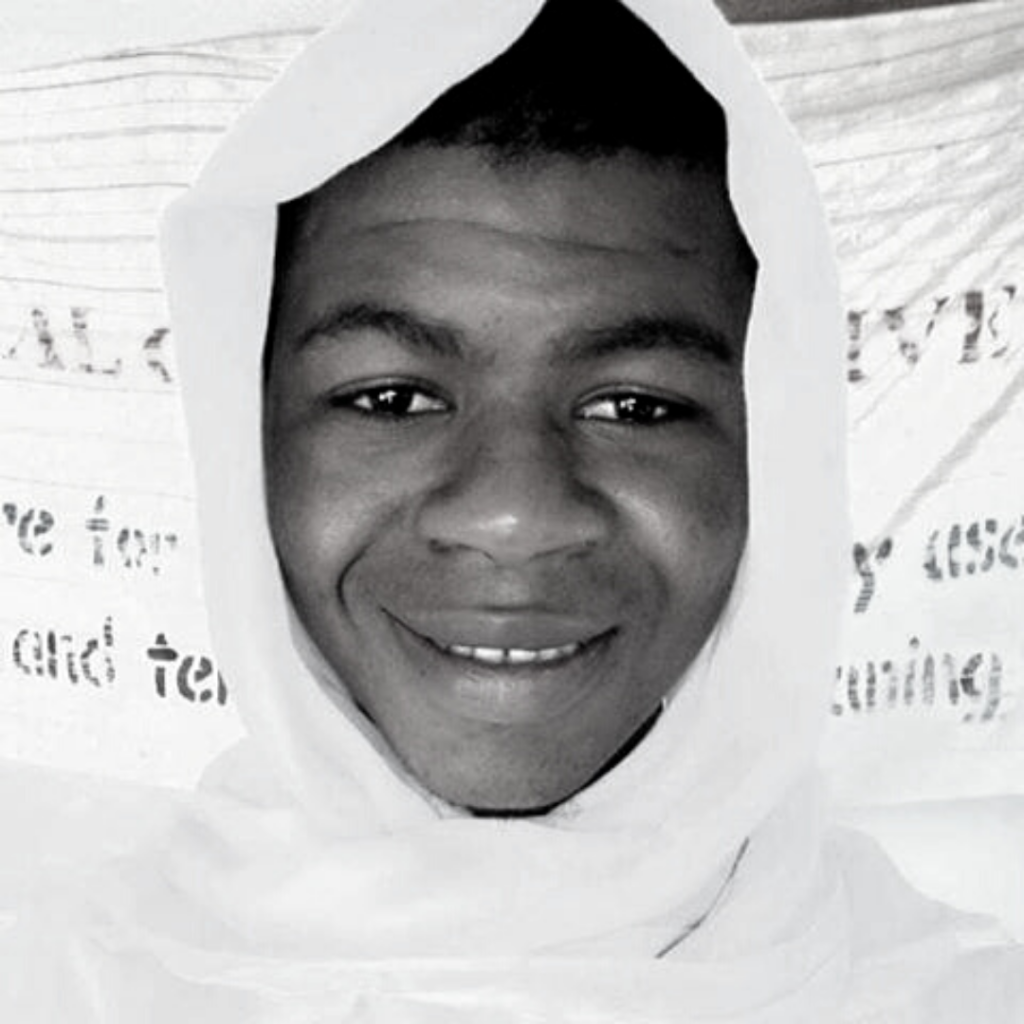 I am Kebab Jagne, a 24 year old climate activist from Gambia West Africa

Why did you join Extinction Rebellion?
I joined XR because I wanna live in a world free from hunger, malnutrition, inequality, climate deregulation and social injustice. XR is doing its best to tell world leaders that there is an emergency at your doorstep. XR welcome everybody and every part of everyone which means anyone is welcomed to join the global movement to demand for climate action. XR uses non violence direct action against governments to try to alert them that there is not enough time anymore. 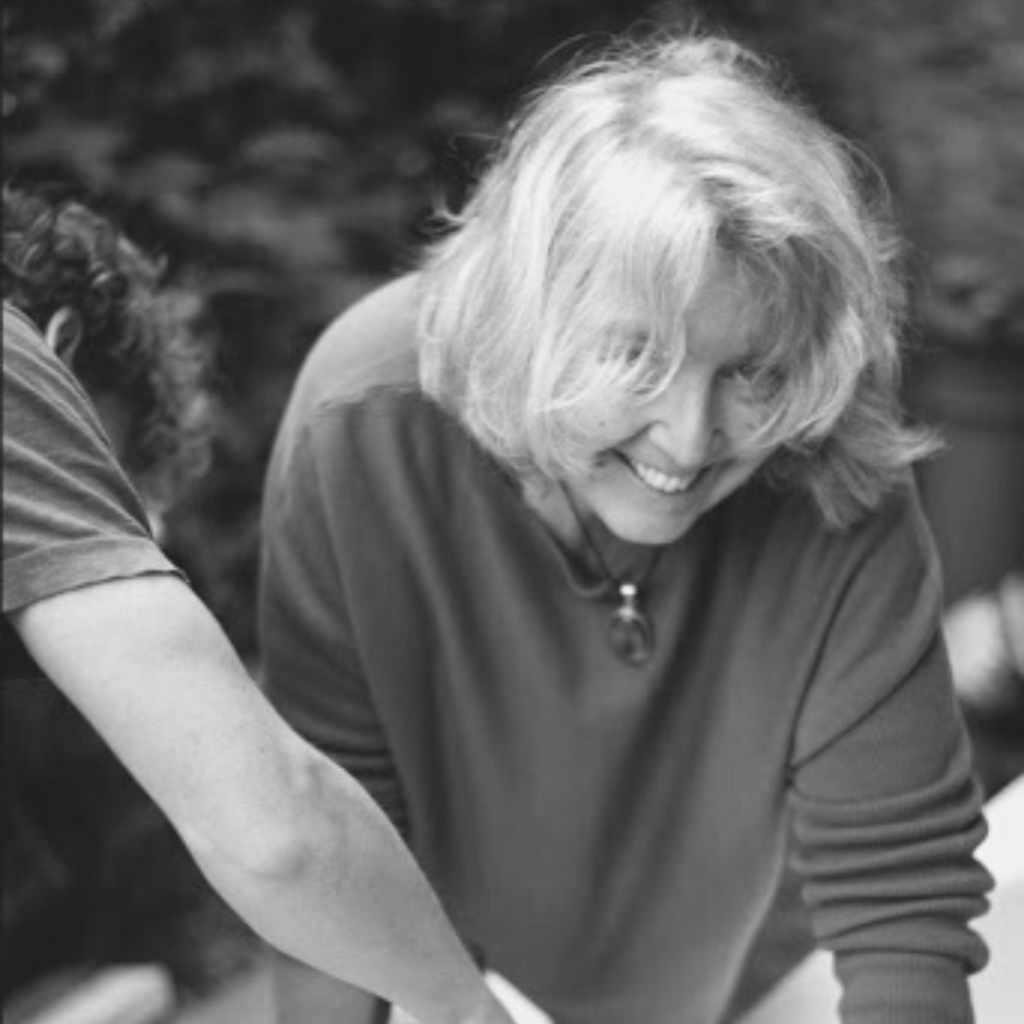 Who are you ?
Clare Hedin, UK and USA (California)
I am an independent musician, performer, recording artist and sound healer. I also educate people about our potential as a species, our potential for creativity and what’s needed for our necessary evolution. I work within Vision-Sensing for Extinction Rebellion and sometimes sit in on other groups, e.g. Political Strategy, Media & Messaging, Ceremony.

I was in California feeling the weight of the Trump administration on our civil rights and environmental rights and felt a calling to come back to UK/Europe. I had seen XR from CA
and was impressed with their cohesion, humour, seriousness and effectiveness – they seemed creative to me, so I wanted to join the tribe and get something done for everyone. I moved back to London after 30 years of living and working in San Francisco area – because we are in a time of crisis. I feel we need to help people understand that simply recycling their plastics at home is not in any way going to scale up to the levels of systemic change that we need. There needs to be a mass education about our crisis and XR are the only people capable of doing it.

What actions have you already participated in?

I participated in the April Rebellion and October Rebellion. I made bathtubs for the October rebellion with Hammersmith and Fulham branch. I gave H4E talks, I talked to people in public transports and in cafes – and wherever there is conversation that can happen. I also sing in the ceremonies and meetings. 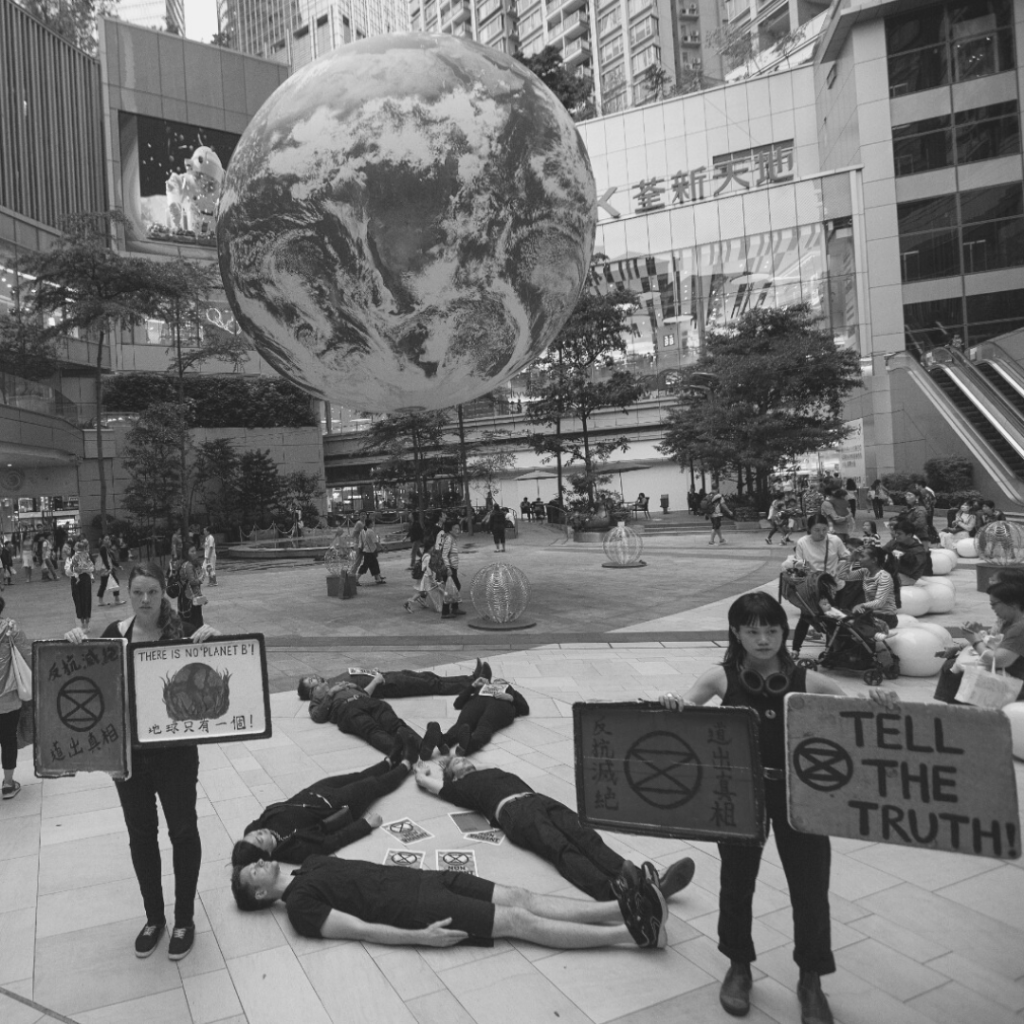 Why did you join Extinction Rebellion ?

I felt very powerless about the climate and ecological crisis and I wanted to do something
active to push for change. XR has had a huge, positive impact across the world and I wanted
to be part of bringing the movement to Hong Kong and spreading awareness here.

What actions have you already participated in?
We have staged several die-ins in various public spaces around Hong Kong.

We have also held a ‘Funeral March for the Earth’, during which we carried a cardboard coffin with the
words ‘Our Future’ on it around Hong Kong. We have protested the deforestation of the Amazon at the Brazilian Consulate in Hong Kong and outside the BlackRock offices. We have also participated in the Fridays for Future Marches in Hong Kong, to show solidarity with the student strikers.